Two remarkable days in October (28 – 29) 2017, 65+ enthusiast gather in one physical space in Dar Es Salaam, Tanzania to see what they can prototype within this two days. The second Science Hack Day Dar where Designers, Developers, Scientists and all who were excited about making things with science showed up just to make amazing things with science Buni Innovation Hub, the amazing place for innovations with the backup of the fastest Internet from Raha Liquid Telecom. All good creative moments were captured by K15Photos 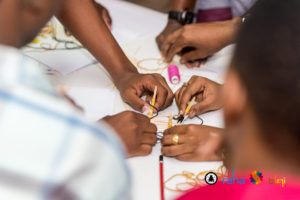 The event began at 8 am on 28th October with an amazing history of science hack day and later introduced some lightning talks, icebreaker and began discussing different design challenges

Nine teams formed with different professionalism and ambition people but later they came up together with one amazing prototype solution.

Again, K15Photos did a wonderful job of capturing the science hack memories, all the memories are found on this link SHDDar 2017 Memories You can also search for #SHDDar or #sciencehackday on Twitter, Instagram, and Facebook to find many more taken by some of the attendees. Thank you to all the sponsors: Raha Liquid Telecom,  Buni Innovation Hub,  K15Photos, We absolutely would not be able to have events like this exist without their support.

Many thanks to the Science Hack Day Dar Team Emmanuel Evance,  Lupyana Mbembati,  Jennifer Kalemera and Masuka Manyasi. Who volunteered to organize this event.

Thanks to all our Mentors Catherinerose Barreto Cofounder of KINU, Arnold Minde from Ubongokids who was also a judge, Emanuel Feruzi from K15 Photos, and to all judges JohnPaul Barreto from HDIF and Mahbib Jemedari (Head Of Marketing at Raha Liquid Telecom) and to all who provided amazing activities to everyone to enjoy! And THANK YOU to everyone who attended for making Science Hack Day Dar. I hope to see many of you again next year and HAVE FUN WITH SCIENCE.

View all posts by evance